Yesterday, Americans Against Terrorism sponsored a rally on the west steps of the Colorado State Capital, supporting Israel, and calling on both Secretary of State John Kerry, and the world at large, to stay out of the way as Israel works to demilitarize Gaza, to permanently eliminate both the barrage of rockets being fired into Israel, and the network of tunnels designed to allow Hamas terrorists easy access to innocent Israeli civilians. 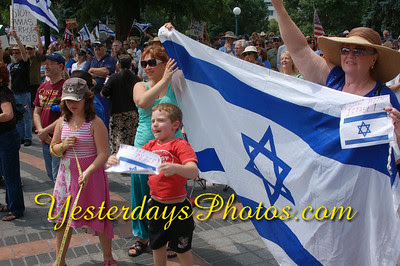 While I missed the first few speakers, I recorded the rest, starting with the last few comments of Democratic Colorado State Representative Rhonda Fields.  While she supports Israel, her comments, suggesting the need to support a truce, peace, and "diplomacy," raised enthusiastic objections and comments from the crowd.  Ms Fields is a strong proponent of gun control here in Colorado, and though we all want peace, she disagreed with most of us at the rally, about the need to allow Israel to use force against Hamas, to secure that peace.

Other speakers included Steve Kelley, Dan Caplis, Jimmy Sengenberger, Bob Beauprez, and the Chairman of Americans Against Terrorism, Dr. Neil G. Dobro.  Please listen to the audio I recorded, which can be downloaded here.  Many more of my photos can be seen at YesterdaysPhotos.com.

Israel, and those who came to support her yesterday, are Choosing Liberty.  The people of Gaza Choose Slavery every time they elect Hamas to represent them.  In turn, Hamas Chooses to force those people of Gaza into the worst kind of Slavery, to be human shields protecting the weapons of Hamas.

It is a more obvious example of the same choice we face here, every time we vote, or choose not to vote.  Will we choose leaders who support Liberty, or leaders who would enslave us?  I  ask you to Choose Liberty, in the Liberty-Slavery-Choice.